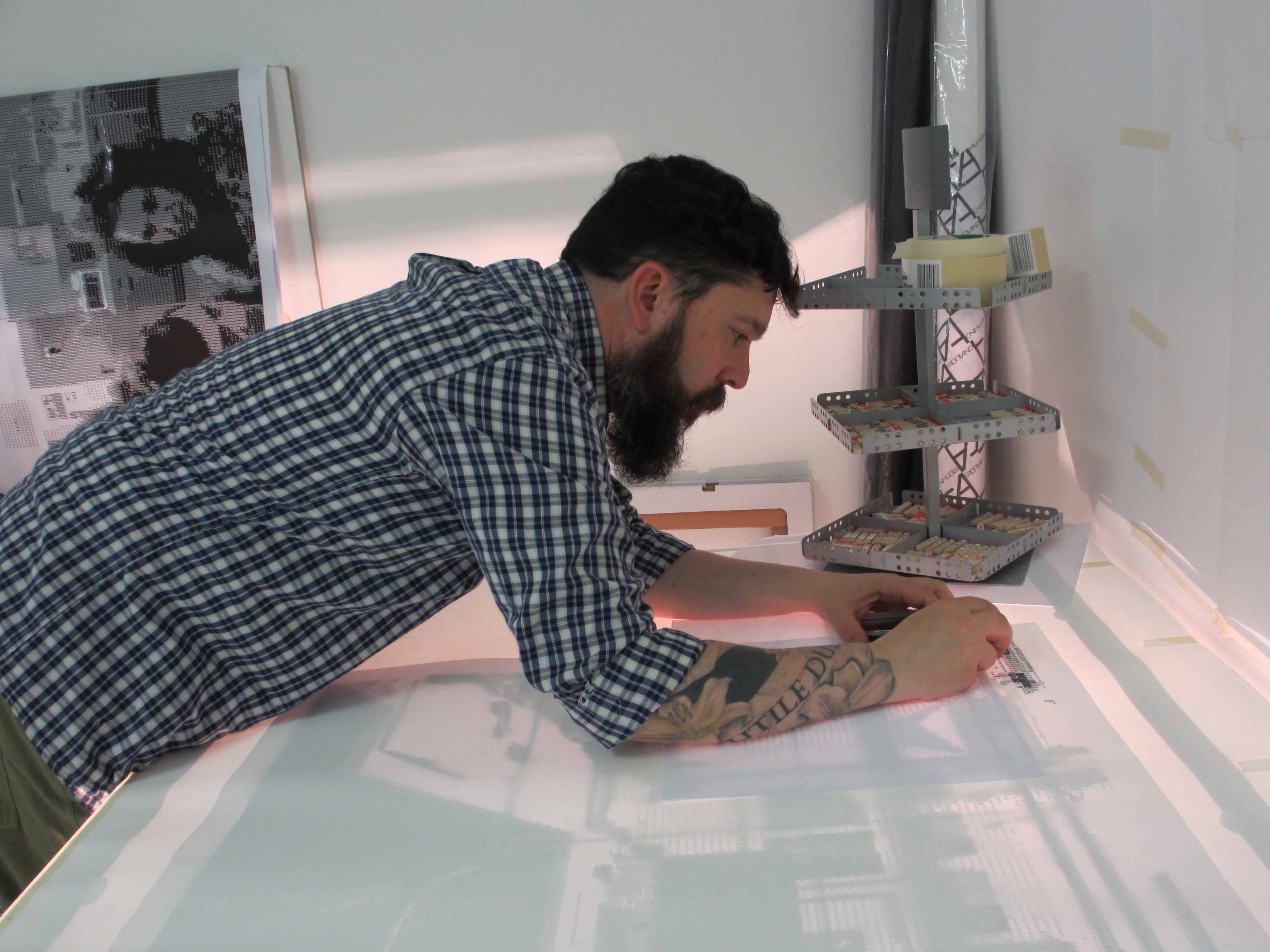 The work of the Italian artist Pier Giorgio De Pinto thrives on the relationship between representation and concept in a constantly and suddenly changing image-based society in search of a new identity. Since the sixties, recent changes have been taking place in parallel with the rise of new technologies, which partly replace man, conceptualising his creative actions. The result is the advent and materialisation of a new aesthetic of art and, by analogy, of that self-same creative action. Machinery first, then later computerised technologies have truly influenced the language of art in an aesthetic sense: excellent artifices of the process of the virtualisation and creation of countless rhizomes of virtual worlds and invented parallels.

Encoding and decoding, identity and otherness are the themes that De Pinto develops continuously. He is passionate about the use of new media as a means to involve the audience, creating performative experiences and immersive environments. Currently He is focused on synthesizing expanded cinema, live performances, AR (Augmented Reality), VR (Virtual Reality), digital codes, infographics, mapping territories and human factors as a way of combining different physical and virtual media to tell a story through experiential installations.

De Pinto has generated an important addition to his opus, which is conceived of globally as “Future is now”. A Genius Loci (spirit of place) as a territorial comparison and a new geographic/geometric definition, using the body as territory in terms of its “divine” proportions. This aspect of definition is not restricted to the body alone, but includes a journey on our common environment, our planet, whose route can be plotted on the body, developing a work with contemporary esoteric and alchemic features and how they relate to the archetypal forms of the past.

In many of his works, sounds, objects, watercolors and drawings, coded movies, functional architecture and interactive installations create spaces that develop a poetic and conceptual dimension through sensory perception, tactile experience, reflection and awareness. He is constantly seeking new ways of drawing the viewer into active participation rather than simply remaining a neutral observer. Art can and should be an experiential, transformative encounter, both externally and internally.

De Pinto has exhibited and performed in numerous institutions, museums and art centres, such as Tate Britain and Whitechapel Gallery in London, Pesti Vigadó Palace in Budapest, Modern Art Museum of Yerevan, Armenia; La Raffinerie/Charleroi Danse in Brussels. Palazzo Medici Riccardi in Florence, Palazzo Ducale in Genoa, ViaFarini DOCVA and BASE in Milan, Pinault Foundation at Punta della Dogana, Palazzo Grassi in Venice, MACT/CACT Museo e Centro d’Arte Contemporanea Ticino e Museo Civico Villa dei Cedri in Bellinzona, i2a International Institute of Architecture in Lugano, Haus der elektronischen Künste and Fondation Beyeler in Basel, Kunsthaus Baselland in Muttenz, Le Manoir in Martigny, and Cabaret Voltaire in Zürich. He also exhibited in the 7th Berlin Biennale and He was among the artists of Manifesta 11 in Zurich and of Regionale 17 in Basel. His artworks can be found in international public,  private and corporate collections.

1968, Born in Civitavecchia, (Rome). He lives and works in Ticino, Switzerland.

– Fundraising Course with Brainard Carey of The Artworld Demystified in New York, USA.

2018 Digital synesthesia Play with the image, listen with the body. Tactile, optical and acoustic perception experiences. Workshop with the students of the Cardinale Agostini Secondary school in San Martino di Lupari, Italy.

2015 Me and the Armenian genocide. Workshop with Edmond Habetian at MAMY Modern Art Museum Yerevan. Armenia.

2014 C.O.R.E. Strange Foreign Bodies. Workshop in collaboration with the philosopher

2017 Evolution of a construction project. 5B Space, Bellinzona (CH).

2016 How to heal our broken hearts. Performance and interactive installation at Cabaret Voltaire, Dada Zurich (CH).

2018 Enigma and Desire: Intimate Thoughts about the Functionality of Art, Intangibility and Diagonals in Time. Group show at MACT/CACT, Bellinzona, Switzerland.

2014 The Voice and the Lens. Whitechapel Gallery, London (UK).

2019 Human-Human collaboration Art, Workshop and multimedia event with Paolo Gallina and Pier Giorgio De Pinto. In collaboration with DIA (Department of Engineering and Architecture) of the University of Trieste and IED Milano for Milano Digital Week at Base, Milano, Italy.

2018 Contribution to the project Everything I know by Mariagrazia Pontorno, Pisa, Italy-Rio de Janeiro, Brasil.

2017 Video ‘WTF did I just watch?’ for the ABCBA project by CrudoStudio, London, UK

2015 Talk and book presentation 6PM Your local time at La Triennale di Milano and MAXXI MUseum Rome (I). Curated by Link Center for the Arts of the Information Age , Brescia (I).

2015 AMAE/De Pinto 58 (+1) INDICES ON THE BODY. Index 42: the phases of the pomegranate. Live stream performance in collaboration with AMAE and Jean-Luc Nancy.

2015 Music Was My First Love. Performance and interactive audio visual installation for the event 6PM Your local time. Castle of Brescia, Brescia (I) and De Pinto’s studio (CH).

2014 We are what we pass down. Performance with Karine Janjughazyan at MAMY Modern Art Museum Yerevan. Armenia.

2014 Workshop and Performance. 58+1 Indices on the body. The Living Archive. MACT/CACT (CH)

2012 Video Contribution to the project Where is the sun, now and here and there by Monika Sennhauser (CH).

2012 Transiti. Editing video from the MACT Collection for the showreel at [.BOX], Milano (I).

Collaboration with the philosopher Jean-Luc Nancy and the AMAE Art Collective in London, with Ivan Lupi, Research Fellow of the Centre for Fine Art Research (CFAR), Birmingham City University (UK); in collaboration with Prof. Daniel Fetzner and Dr. Martin Dornberg of the research group mbody, University of Freiburg (D).

2012 – co-curator with Mario Casanova for the show Subtle Psycho-Geographies: A Calvary for the Image.

2011 – Curator of the exhibition Arspolis in Lugano, Switzerland; selected for the Swiss Exhibition Award 2011.

Finalist as curator for the group exhibition Arspolis 1. Extimity. The familiar stranger. Real, Symbolic and Imaginary of the others. Swiss Exhibition Award 2011 (CH).

– Article by Dominique Moulon for #LAYERS, Brussels on mediaartdesign.net. 2018

– Exhibition catalogue Digitale Abstraktionen, ebook by xcult.org, the Art Institute of the Academy of Art and Design in Basel FHNW and HeK (House of Electronic Arts Basel). October 2016

– Exhibition catalogue 6PM Your Local Time. Curated by Link Center for the Arts of the Information Age , Brescia (I). September 2015.

– The time-specific era. A rare case of video-art distributor in Italy: Visualcontainer MyTemplart     Magazine, May 2014

– Text contribution for Curare il curatore/ To cure the curator by Virginia Zanetti. 2013