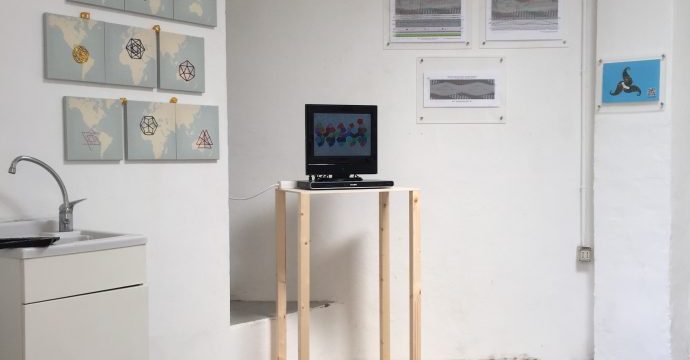 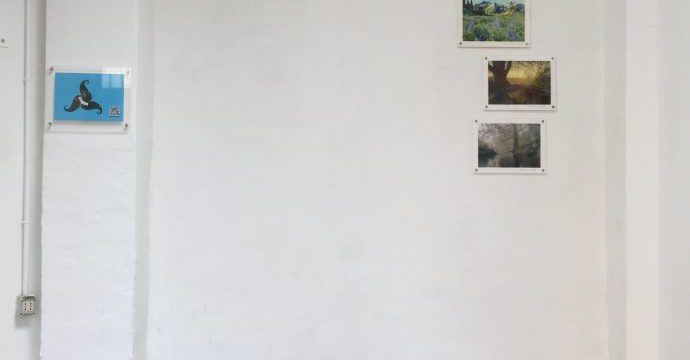 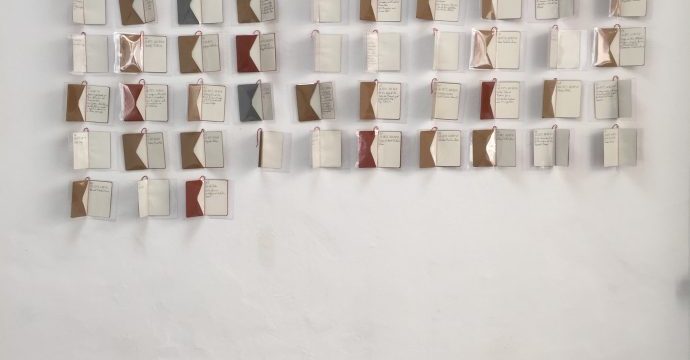 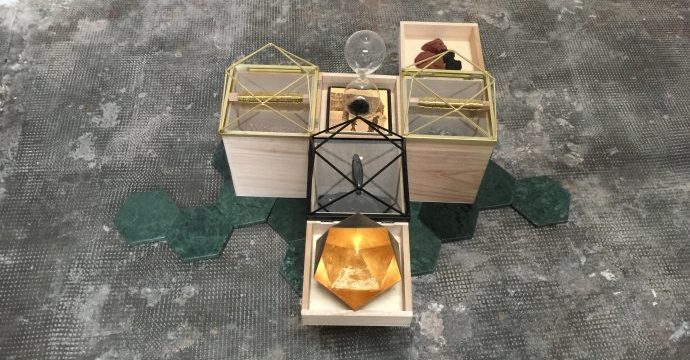 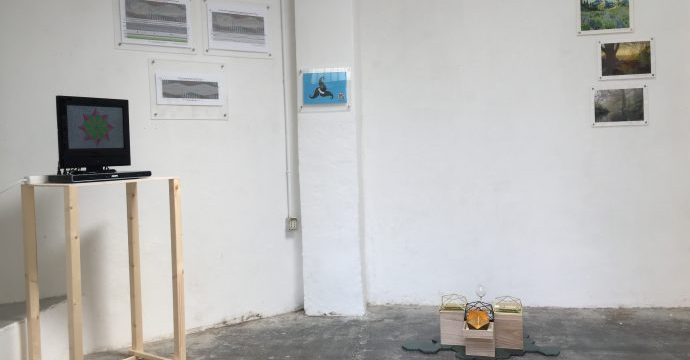 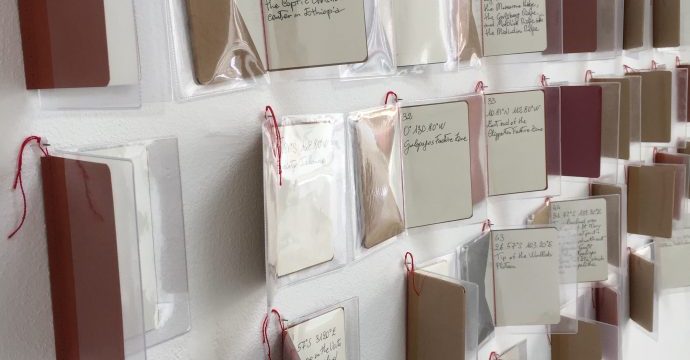 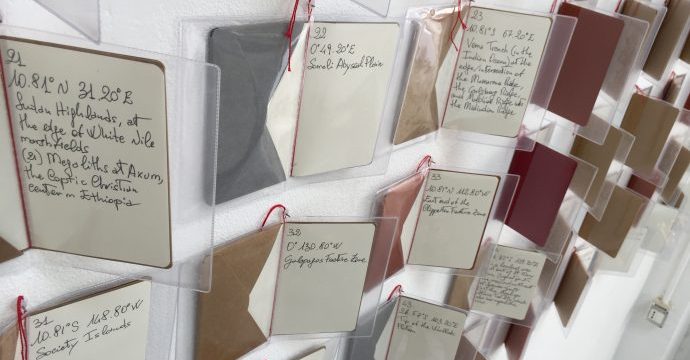 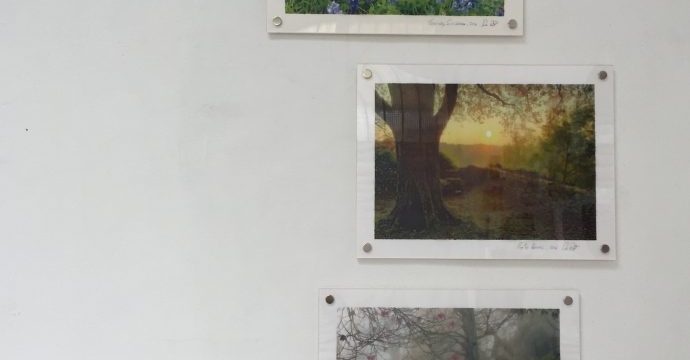 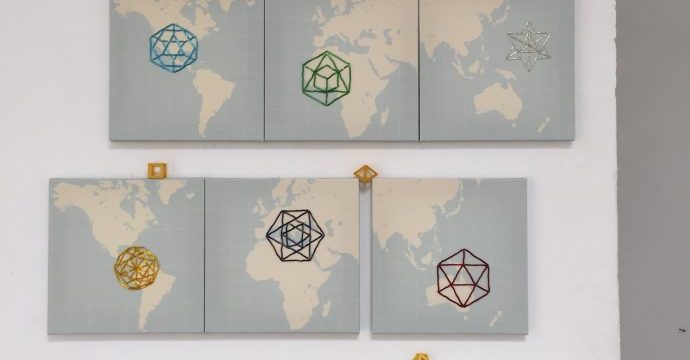 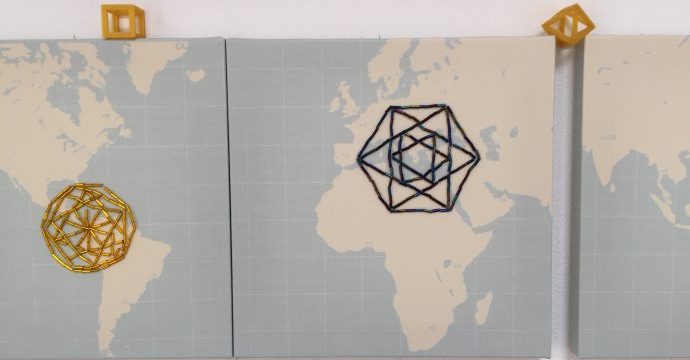 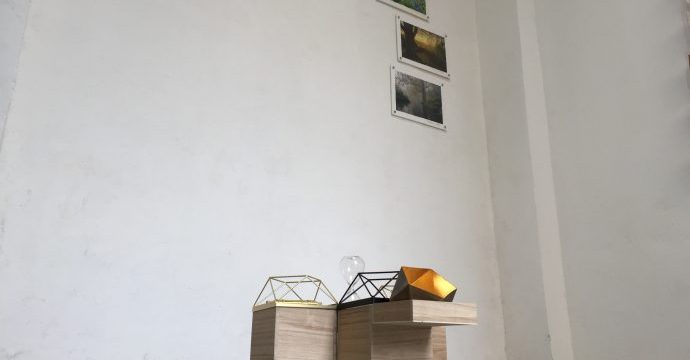 The morpheme placed in front of the word ‘chemestries’ in the title refers simultaneously to geography and geometry as themes widely used by the artist.

The geometry that De Pinto uses finds its roots in the study of nature, as well as in the mathematical principles that compose it. In the artist’s work there is above all a clear reference to traditional “sacred” geometry which refers to the five Platonic solids and the study of the Divine Proportion, a text by the mathematician Luca Pacioli and illustrated by Leonardo da Vinci.

The five Platonic solids have always been related to terrestrial and cosmic geographies: the cube to the earth, the tetrahedron to fire, the octahedron to air, the icosahedron to water, and the dodecahedron to the universe or prana/ethere.

Plato wrote that “the earth seen from above resembles a ball contained in twelve pieces of skin sewn together”, a direct reference to the dodecahedron as a symbol of Gaia, the living planet Earth.

The artist presents, written notes, audiovisuals, sculptures and maps, “perfectible material” as he himself remembers because it is “interpreted representation”; the installation gives us back a personal cartography whose charm lies in all those omissions, errors, influences and suggestions with which it was created.

De Pinto has geo-mapped and geo-tagged the space of the host structure, finding a location as an energy/magnetic/astral/thermal node in that flow of ways called Ley lines. A tribute to MARS, ‘the Milan Artist Run space’ to its nature as a cultural research container, to all that humanity that has passed through this unusual place that often “transfigures itself into an imaginary topos”, as Fabio Carnaghi, the curator, reminds us on the occasion of a previous exhibition.

Ley’s lines, also known as ‘leys’ and ‘dragon lines’, are supposedly energy lines present all over the earth and “navigable” using various terrestrial magnetic fields. An article in the journal New Scientist, (Robin R. Baker. A sense of magnetism. pp. 844-846, 18 September 1980), suggested that different species such as pigeons, whales, bees and even bacteria can navigate using the earth’s magnetic field. It is believed that a tissue containing a substance called magnetite is responsible for this. Magnetite allows living creatures to perceive magnetic changes. This compound is present in small amounts between the nose and eyes, within the human tissue attached to the ethmoid bone. It has also been said that Ley’s lines refer to vast prehistoric trade routes, where man, due to the absence of high-tech instruments, relied on observation and intuition. These lines also map with surprising precision some places where man intervened by erecting places of worship or leaving the area intact to Nature, probably as a sign of respect, without building anything.

The mapping of MARS carried out by De Pinto was realized using a number of instruments including those supplied by Hunter Research and Technology of Williamsburg Virginia, USA; a company specialised in geographical surveys and mapping managed by Craig Hunter, a mechanical/aerospace engineer. De Pinto also used software that enabled an infographic mapping that was presented at the exhibition. The software was designed by Bill Rankin, a historian and cartographer whose mapping activity is focused on revisiting everyday urban and territorial geographies.

De Pinto therefore starts from the body but includes a journey towards our environment, expanding into a vision towards our entire planet. The artist traces a path on the earth’s surface and what lies above and below it; developing it in terms of contemporary esoteric and alchemical characteristics.

He has exhibited and performed at international institutions and museums such as Tate Britain and Whitechapel Gallery in London, Pesti Vigadó Palace in Budapest, Palazzo Medici Riccardi in Florence, Palazzo Ducale in Genoa, ViaFarini DOCVA in Milan, Pinault Foundation and Palazzo Grassi in Venice, MACT/CACT Contemporary Art Ticino and Museo Civico Villa dei Cedri in Bellinzona, i2a Istituto Internazionale di Architettura in Lugano, HeK Haus der elektronischen Künste and Fondation Beyeler in Basel, La Raffinerie/Charleroi Danse in Brussels. He also exhibited at the 7th Berlin Biennale and was among the artists of Manifesta 11 in Zurich. His works can be found in international, public, private and corporate collections.