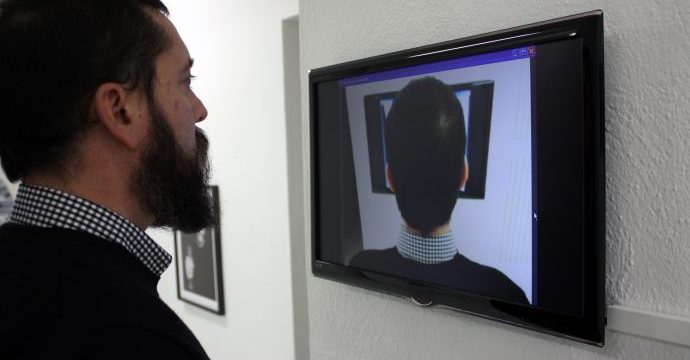 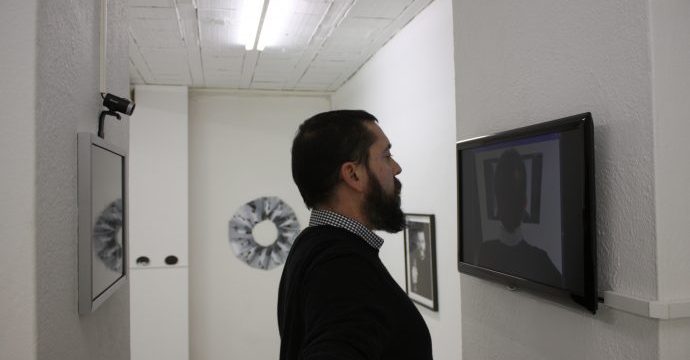 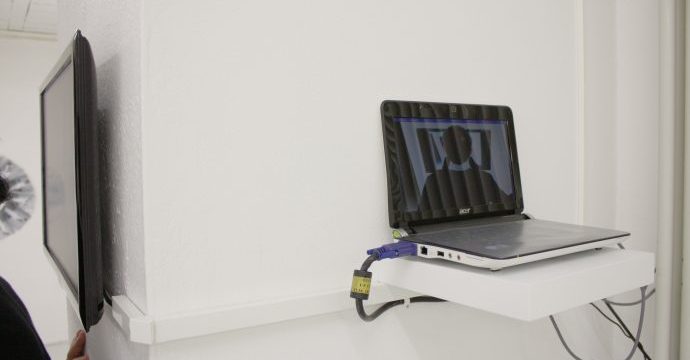 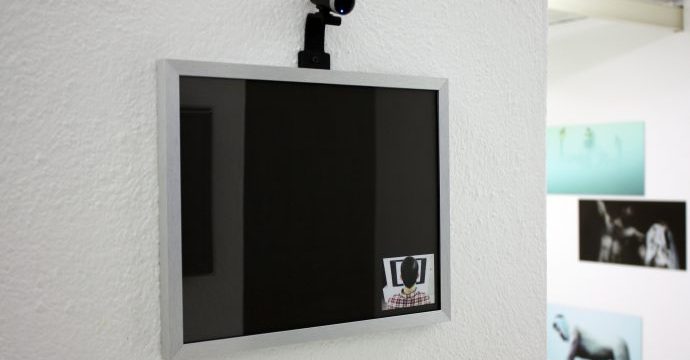 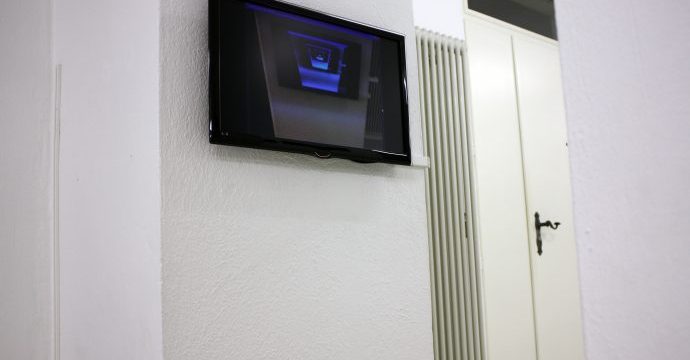 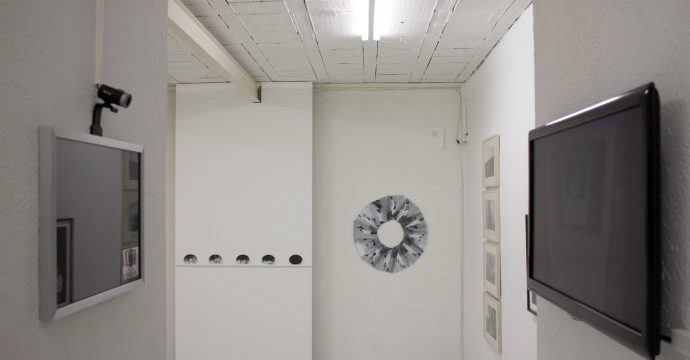 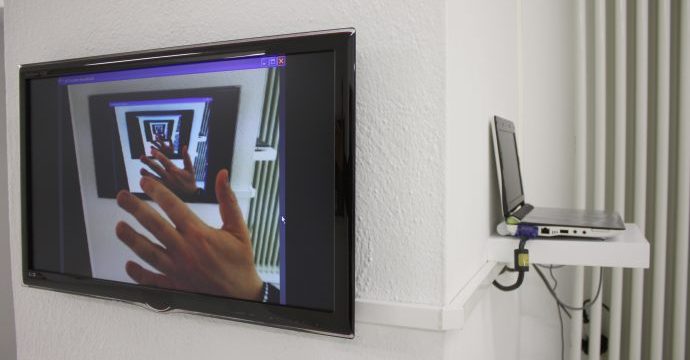 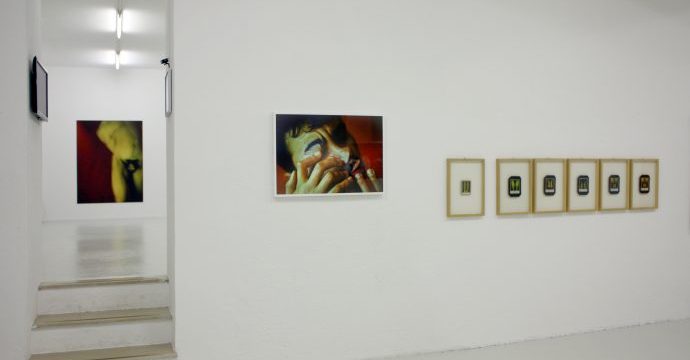 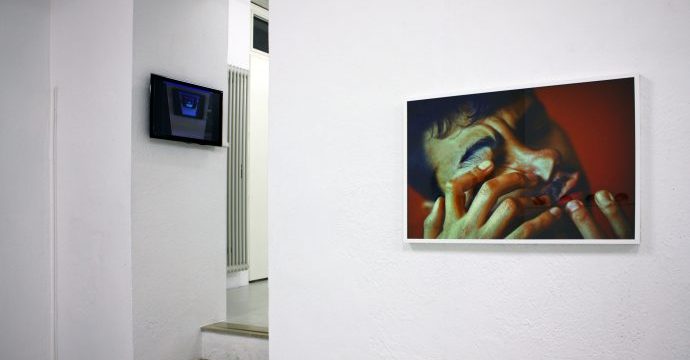 The work was conceived as site specific installation for the group show The solitary body: self-portraiture in contemporary photography.

Usually we mirror ourselves and get our image/portrait frontally by reflection.
With De Pinto’s installation, instead, we mirror ourselves and what we see is the image, the portrait, of our back.
If you try to turn around you have exactly the reflection framed in a frame. The game continues endlessly and will never return your frontal portrait.
A denial/acceptance then of our image. An unusual vision of a part of our body that normally escapes our attention.
It was interesting to see how many men, using the installation, discovered that they had some bald spots in the back of their necks and very often brushed the dandruff falling on their shoulders from their clothes. The women, on the other hand, have almost all fixed their hairstyle and the collar of their shirts or clothes.

With the exhibition entitled THE SOLITARY BODY: SELF-PORTRAITURE IN CONTEMPORARY PHOTOGRAPHY, the MACT/CACT is breaking an eight-year record of almost complete absence from photography to stage an exhibition, THE SOLITARY BODY, that focuses very much on this field and could well constitute the first in a new thematic cycle.

Drawing its inspiration from a recent anthological publication by Giorgio Bonomi, the approach adopted by the curator follows the line laid down by the title almost to the letter, keeping faith both with the thematic policy at MACT/CACT and with the criteria of pure representation in photography.

After a period in the past when the Düsseldorf School gave shape to a new vein of thought in photography, we had a certain difficulty in finding a new terrain of research that would be both fertile and convincing and could link back to some (any) form of avant-garde. The changes that have already been giving a new connotation and morphology to evolving society for several years now make no exception for the arts or for socio-cultural expression through artistic creativity. While on the one hand the twentieth century did everything in its power to shatter man and his mindsets, leading to paradoxical art forms and not to an aesthetic of art (except possibly for the expression of any militancy), civil society abandoned by its institutional counterpart created – also in the area of art – a new aesthetic of photography, more closely linked to figurative forms and easily traceable to the history of painting. The mediation of such internet-based social media as Facebook, Twitter, Flickr and Instagram (but above all Facebook) has inevitably generated not so much new as renewed conceptions of imagery, while also stressing that – in this condition of historical nemesis – art still draws on the intelligence of the past, rather than acting as a model and source of inspiration for the applied arts and other forms of parallel creativity, as it did for long periods in the past. This is a phenomenon that is deserving of study, however, and fashion photography, along with many advertising shots, is also as beautiful as the art that is considered to be ‘pure’ – if not more so.

In the specific case of this exhibition, there is moreover a notable fielding of new artists, who come from a background of commercial photography (and not by coincidence), in particular from the area of fashion, where technically virtuoso execution and total satisfaction are of the essence. Even so, this field, too, attempts to brush up against pure art and the arrogance of its medium: a new trend that is influencing the latest artists to discover an artistic signal, even while they are in the act of translating an aesthetic that is dictated by the camera and the commercial business world. Genres, identities, transvestism and (un)masking are the crucial issues at stake in this exhibition, which focuses on the body unveiled, with all its multiple meanings.