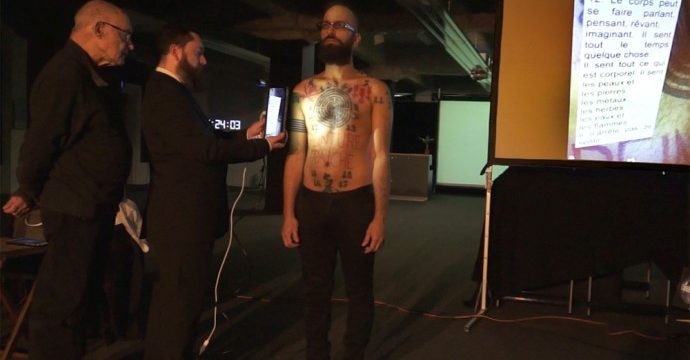 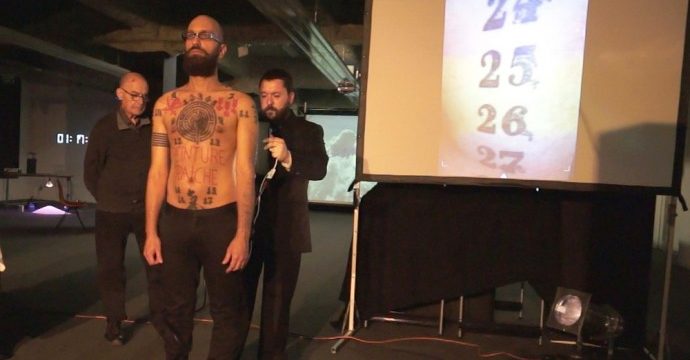 What are the differences between sound, noise, voice and silence? What qualities of listening do they demand and where does philosophy stand on this subject?

In 2012 the artistic collective AMAE and the artist Pier Giorgio De Pinto started a conversation inspired by the philosopher Jean-Luc Nancy’s treaty 58 indices sur le corps (Editor’s note 58 indices on the body), and extended his text into a series of performances with the aim of exploring the contemporary body and involving the audience in close touch as a way of generating in it a deep critical conflict.

A few months later, the philosopher himself decided to participate in the project and, prodded by stimuli offered by the artists, added new words to his Indices, thereby taking his thoughts towards an unexpected “queer” direction.

A body becomes the media of an encoded text. The philosopher’s writing is represented by numbers which are tattooed on the skin of the performer’s body. Through a reader such as a tablet or a smartphone these numerals can be opened in AR (Augmented Reality) and decoded and expressed aloud as paragraphs by the philosopher’s pre-recorded voice. The body speaks without a mouth. It speaks with the philosopher’s voice, investigating in depth the notion of muteness and the sound of thoughts.

Venues of the project: